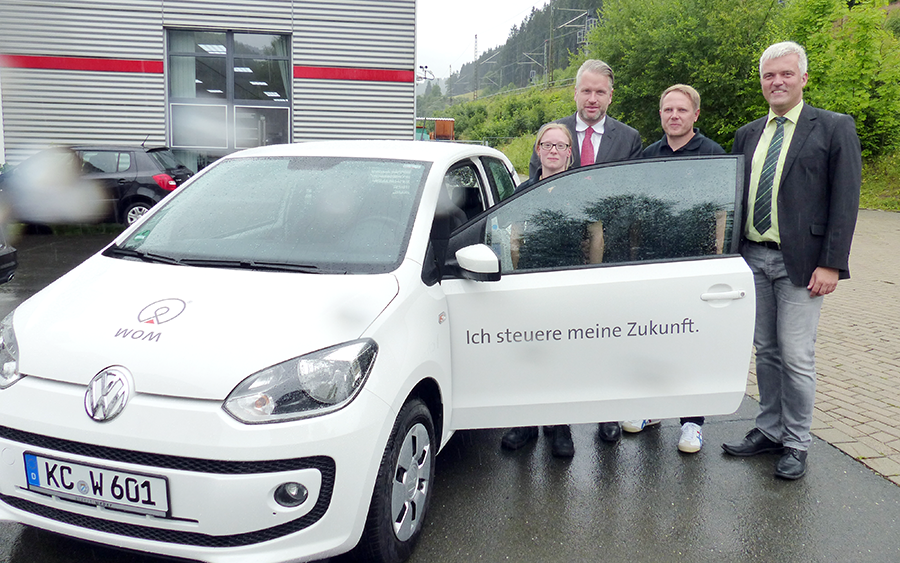 For the sixth time, WOM is awarding a VW up! to its best trainee in the second year of training. That means a car free of charge for one year – with insurance and fuel costs included!

This year, Lina-Marie Harnisch from Ludwigsstadt was the lucky recipient. The future mechatronics engineer was more than surprised, saying this was completely unexpected. As the 18-year-old does not have her own car yet, the joy was all the greater when her name was called. Her Trainer, Stefan Beetz, was extremely proud and congratulated her warmly.

“The topic of training is extremely important for WOM,” notes CFO Oliver Kupka during the key handover. “Only with well-trained and motivated young professionals can we meet the future challenges in the Upper Franconia region and support our planned growth”, adds Kupka.

The medical technology company is currently training 16 young people. Six additional trainees will start in autumn. By now, WOM has more than 270 employees at sites in Ludwigsstadt and Reichenbach. Over 30 new jobs have been created in the region within a year and the site will be strengthened by investments in the amount of millions in the future as well.

Mayor Timo Ehrhardt takes pride in the sustained commitment and location loyalty of WOM in the Rennsteig region. “The close cooperation between the city and the now largest employer in Ludwigsstadt is of enormous importance”, adds Ehrhardt.