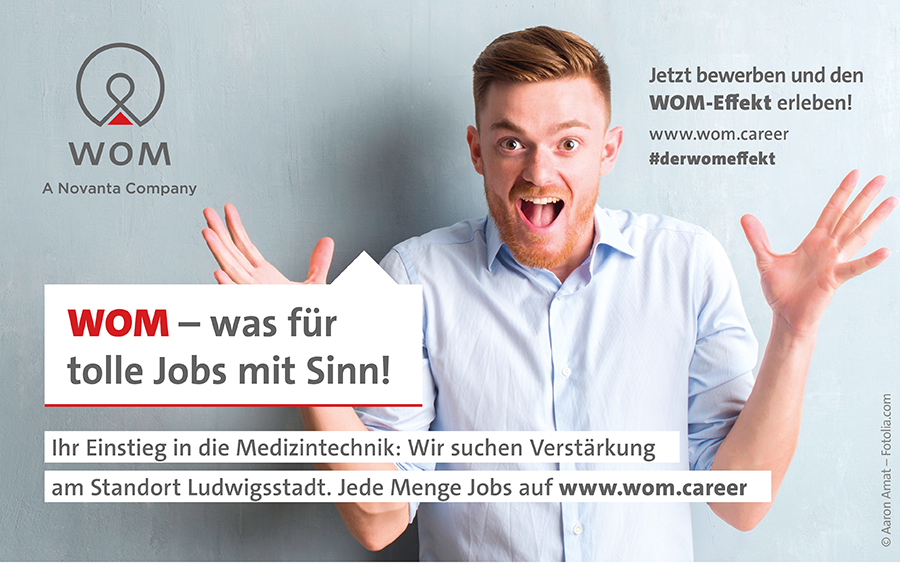 People experiencing something impressive often say “WOW” to give free rein to their enthusiasm. If it is something special, it is often called the “WOW effect.” Now, if you only turn one letter over, the WOW effect becomes the WOM effect – which brings us to the idea of a new campaign motif in Upper Franconia that replaces the “space job” posters from summer.

Why should these particularly attractive and eye-catching motifs be replaced? The campaign with our cleanroom colleagues has led to so many applications that we no longer have to concentrate only on hiring cleanroom personnel, but can extend the message to our general recruiting.

The “WOM effect” of the new motif refers to the core idea that there are many jobs in Upper Franconia, but only a few that really make an impact: namely those in medical technology, those at WOM. Therefore, the young man can also say with full conviction: “WOM – what great and meaningful jobs!”

The campaign consists of large-scale advertising at the attention-grabbing locations where the space job motifs were already depicted, a radio spot on Radio EINS, and Facebook advertising. If you like the measures: Become part of the team with WOM effect, we look forward to receiving your application!