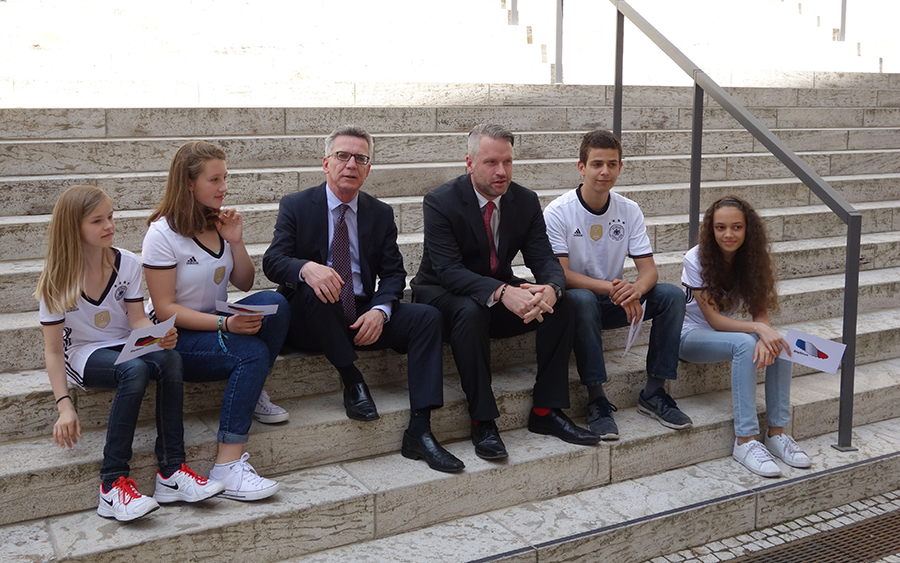 The excitement was great during the preparations for four children of our WOM employees to interview Interior Minister Thomas de Maizière concerning the aid initiative BigShoe.

Our young reporters Fanny Tschepe (12 years), Nina Michel (14 years), Gina Gütlhuber (14 years), and Lorenz Hohenhaus (16 years), accepted the invitation to the Federal Ministry of the Interior in the Administration District of Berlin. The young team of reporters thus followed in the footsteps of their reporter colleagues from the Allgäu region, who already conducted the same interview with the footballers Mesut Ozil and Paul Pogba.

In the courtyard of the Ministry, they all practiced a little bit on the stairs shortly before the well-known politician sat down with them to reply to their confidently asked questions about BigShoe in a very relaxed atmosphere. Questions also included, what else, the upcoming European Championships football event.

With such curios interviewers, the Minister of the Interior also took the opportunity to ask questions himself. After Lorenz Hohenhaus had revealed that his favorite player from the German national team is Jérôme Boateng (first he named a French footballer, something that was ignored quickly), the Minister shot off a knowledge question. Undeterred by a camera crew and photographers, our young reporter Lorenz did not loose his cool. And clearly, Lawrence knew that Jérôme was born in Berlin. Who doesn’t know that?

On behalf of BigShoe, Oliver Kupka presented the Symbol Shoe from the World Championship 2014 in Brazil, which is now going to stay permanently at the Federal Ministry of the Interior.

Mr. Minister, we thank you for the pleasant conversation!